Garden City, KS-If some considered last year's upset win in El Dorado an aberration, Saturday night went a long way in proving that Garden City is on their way back to national prominence.

In his first career start, true freshman quarterback Peyton Huslig threw for 302 yards and four touchdowns while the defense forced three turnovers and held Butler to 130 total yards in a 43-0 demolition of the Grizzlies.

"Honestly I was pretty nervous coming in," Huslig admitted afterwards. "But I go into every practice thinking that I will be the starter."

If the freshman was nervous, he sure didn't show it.

And to think, he didn't find out until late in the week that he would get the nod after Dwayne Lawson was held for violating team rules.

"Peyton did a tremendous job," Head Coach Jeff Sims said. "That might be the best first performance by a quarterback that I have ever seen."

On the Broncbusters second offensive possession, Huslig completed 5-of-7 passes for 49 yards including a pellet to Ben Phillips in the end zone, capping off a 12-play, 83-yard drive that put the Broncbusters up 7-0 with 6:27 to go in the first quarter. 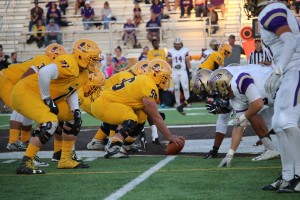 "This offensive staff worked their tails off over the past two weeks," Sims said. "All the credit goes to them."

That offense, which was anemic at best in a 16-14 victory over Hutchinson, produced a season-best 493 total yards with 280 of those coming in the first half.

"It's really hard to put this one into words," Huslig said. "It was a team effort."

And a balanced attack to boot.

Garden City's second score was spearheaded by the ground game when Tra Minter slammed his way up the middle for an eight-yard touchdown. Delshawn Phillips ran in the two-point conversion, and the Broncbusters had a 15-0 advantage late in the first quarter.

"We're doing the same things that we were doing last year," Sims said. "But we're just playing the play. We're not getting out of our element. I don't deserve the credit; the credit goes to these young men who continue to work."

Huslig added his second touchdown pass late in the first half when he connected with Daniel Davis on a back-shoulder fade in the left-corner of the end zone for a 22-0 edge.

"This was a tremendous performance by our offense. What people don't know is this: I told Jayru Campbell that you are the second best quarterback in this league. So I'm giving you the option to start. But I think, Peyton gives us the best chance to win. Jayru looked at me and said coach, I just want to win."

That selflessness epitomizes what Sims preaches all the time. And the move paid off in a bigtime way.

Campbell provided Huslig a big target down the field, and the sophomore didn't disappoint, reeling in a team-best seven balls for 76 yards.

"The difference between Garden City and every other program is this: when I recruit guys I know what they want. They want to succeed in the classroom and for us to help them get to Division I. It's not about being a Broncbuster."

While the offense produced their best four quarters of the season, the defense put the hammer down. 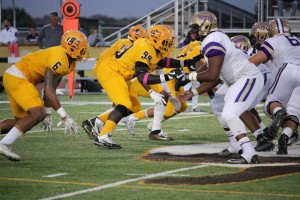 Defensive back Bryan Blunt set the tone, intercepting Butler quarterback David Isreal on the Grizzlies first offensive snap. In total, the Broncbusters held the purple and gold to just 53 total yards in the first 30 minutes.

"We have to continue to be disciplined on that side of the ball," defensive back Mike Hughes said during the week. "We know what we have to do."

His teammate Blunt added a second pick on the game's final play while Delshawn Phillips ended another Butler drive with a red-zone interception in the fourth quarter.

Meantime the offense salted the game away. Huslig added two more touchdown passes in the second half, connecting with Hughes on a 14-yard score before hitting Davis in stride down the right sideline for a 45-yard touchdown that gave the Broncbusters a 36-0 lead with 13:09 to play in the game.  He ended the scoring with a 15-yard touchdown run on fourth-and-2 that finished off Garden City's most lopsided victory over Butler since a 58-7 rout in El Dorado in 1995.

Huslig became just the fourth Broncbuster quarterback in the last three years to throw for 300 or more yards in a game. 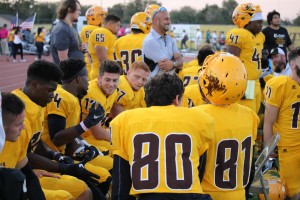 "If you don't know Peyton, he is a great kid," Sims said. "That's what makes this one even better."

Lost in everything was the fact that Minter recorded his fourth 100-yard rushing game-24 carries for 127 and a touchdown. Davis caught five balls for a career-best 100 yards and two touchdowns while Hughes caught three passes for 46 and a score. 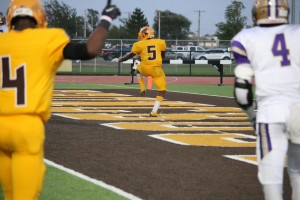 On defense, Alex Figueroa, who returned from a two-game suspension, recorded a team-high nine tackles and two sacks.

For Butler, Isreal was just 8-of-23 for 100 yards and three picks while the nation's leading rusher Kevon Abrams was held to 19 yards on six carries. C.J. Sims caught six balls for 86 yards.

Notes: Butler has not scored an offensive touchdown in 13 quarters…It's the second straight week Butler has been held under 200 total yards; it's only the second time since 2010 that's happened…Garden City recorded their first shutout over the Grizzlies since 1991 (a 36-0 victory at Memorial Stadium)…Incredibly that's also the last time Butler was shutout in a game-a stretch of 25 years (276 games)…Garden City ended an eight-game home losing streak to Butler…Garden City has now forced 19 turnovers to only four giveaways this season (plus-15)