Tra Minter ran for a season high 183 yards and two touchdowns, Josh Hager's defense forced three turnovers, and the Broncbusters won a game in Coffeyville for the first time since 2007, 39-13 on Saturday night.

"This one feels great," said linebacker Jamie Tago, who played in the game despite being involved in a car accident on Thursday. "I was so sore, but there was no way I was going to disappoint my teammates."

And to be fair, the game wasn't even as close as the final score indicated. Although Coffeyville gave the Broncbusters an early scare.

"I told our guys, if you want to know what has to happen for us to lose a game, there it is," Sims said in reference to his team's early mistake. "But the guys responded."

Oh boy did they ever.

"The key to our defense is the pass rush," Sims said. "That sets up everything."

That pass rush helped Garden City (6-0, 5-0) trim the early deficit when Tago flushed Coffeyville quarterback Coleman Key to his right in the end zone before the Colorado-State transfer heaved an errant pass up the numbers. After a long discussion, the officials called intentional grounding in the end zone, which resulted in a safety.

The offense, which failed on their first two trips into the red zone, finally got on the board early in the second quarter.

On second-and-1 from their own 29, Minter ripped off his longest run of the season-63 yards that moved the ball inside the Coffeyville 10. On the very next play, Peyton Huslig, making his second collegiate start, connected with Jayru Campbell in the back, left-corner of the end zone for an 8-yard score before Edward Manase recovered a blocked extra point at the 3 and rolled across the goal line for the two-point conversion and a 10-6 advantage with 12:54 to play in the first half. 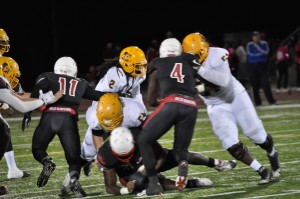 "It's hard to go undefeated," Sims explained. "And sometimes you need lucky bounces. We were fortunate on that blocked extra point that Ed jumped on top of it."

After a Coffeyville punt midway through the second quarter, the Broncbusters were driving again. First, they converted a third-and-3 at the Red Ravens' 33 when Huslig zipped a pass to Gabe Luyanda for 14 yards. Two plays later, Huslig connected with Ben Phillips for 13 and a first down to the 4. That's when Minter put the finishing touches on the six-play drive when he blasted right through Boise State transfer Darreon Jackson en route to the end zone. Huslig added a the two-point conversion by faking the extra point, rolling to his right and diving into the end zone, giving the Broncbusters an 18-6 lead with 6:34 remaining in the second.

"Peyton did his job again," Sims said. "The offensive line protected, and we won the turnover battle. I sound like a broken record every week, but that's what it takes to stay undefeated. We were able to do those things again."

Then, Sims dug deep into his bag of tricks on the ensuing kickoff.

With Coffeyville expecting a deep boot, Luke Herring drilled a line-drive kick off one of the Coffeyville up-men. Mike Hughes fell on top of it, giving Garden City the ball back at their own 48.

On the very next play, Huslig floated a beautiful pass down the right sideline to Campbell, who made the catch in stride before being bumped out of bounds by Jackson at the 5.

"Jayru is turning into the quite the receiver," Sims added.

Everything was setup for the Broncbusters to extend the lead going into halftime. But on fourth-and-goal from the 4, Huslig fumbled on a play-action-pass, and Shawn Simeon recovered for the Red Ravens.

"We made two mistakes in this game," Sims said. "But the guys never put their heads down."

In fact, that fumble inspired one of the most brilliant defensive quarters that Garden City has played all season. 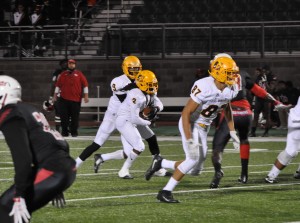 The Broncbusters limited Coffeyville to just 28 total yards in the third period and one first down, capping the stanza with Rashaun Croney's second interception of the night that halted a Red-Raven drive near midfield.

Croney thwarted a Coffeyville scoring chance in the first half when he picked off Key in the end zone.

"That's what we do," Tago said. "This defense is the best in the nation."

Meantime, the Broncbuster offense padded their lead when Minter found pay dirt for the second time: a 23-yard sprint to the house that put the Broncbusters up 25-6 late in the third quarter.

"All the credit goes to my staff and these players," Sims said. "They've put the work in, and the results are showing."

The second-year coach sat back in the fourth quarter and watched his team turn one of the most anticipated matchups of the week into a laugher.

Dwayne Lawson, who replaced Huslig in the final frame, hit Campbell for a two-yard score, putting the finishing touches on a nine-play, 70-yard drive that increased the Broncbuster lead to 32-6.

"Our guys have put themselves in a position to do something special this season," Sims said. "We still have a lot of work to do, but we're getting there." 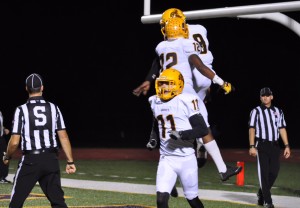 Lawson added the final tally-a 25-yard waltz to the end zone where he shed three tackles for a 26-point advantage.

Huslig finished the night 14-of-23 for 180 yards and a touchdown. Lawson was 1-of-4 for 2 yards and a td while rushing nine times for 66 and a score. Campbell caught five balls for 107 and two tds. Jeremy Faulk registered 10 tackles, three quarterback hurries, a forced fumble and a sack.

Key was 17-of-40 for 211 yards, one touchdown, which he threw late in the fourth quarter to Isaiah McIntyre and three interceptions. Marcellus Ware carried the ball 12 times for 26 yards while Malik Stanley caught a game-high nine passes for 115 yards.

Notes: The win snapped a seven-game losing streak against Coffeyville…With their three turnovers, the Broncbusters brought their season total to 22; they're now plus-17 for the year…It's Garden City's most lopsided victory over Coffeyville since a 26-0 rout in 1992 at Memorial Stadium…The Broncbusters improved to 6-0 for the first time since 2000…Minter notched his fifth 100-yard rushing game of the season…Garden City ran 28 more plays than Coffeyville (86-58) and held the ball for nearly 40 minutes