Dodge City, KS-12 months ago, Garden City Football Coach Jeff Sims sat in his office with the biggest smile on his face.

His squad was 1-7, and they were about to face the No. 1 team in the country.

Not only did that plan work in knocking off unbeaten Butler, it put Garden City back on the junior-college map.

One year later, the Broncbusters aren't only on the map, they own it.

Tra Minter rushed for 109 yards and two touchdowns, Josh Hager's defense scored for the fourth time this season, and top-ranked Garden City wrapped up their first, outright Jayhawk Conference title in 15 years with a 36-7 victory over No. 12 Dodge City on Saturday night at Memorial Stadium.

"I want everyone in the community to thank these players," Sims said afterwards. "They're the reason we are where we are. Their hard work and dedication has brought us to this point."

Saturday's matchup was hyped as one of the marquee games around the country. But the Broncbusters turned it into a laugher early.

Dodge City (6-3, 3-2) spoiled their chance to take an early lead when they wasted a 14-play, 59-yard drive that consumed nearly seven minutes. Back-to-back incomplete passes at the Garden City 16 turned the ball over on downs, and ignited a brown-and-gold explosion along with it.

On Garden City's (8-0, 6-0) first play from scrimmage, freshman quarterback Peyton Huslig delivered a perfect, play-action-fake and found a wide-open Harley Hazlett, who made the catch and streaked down the right sideline before Conquistadors' linebacker Gary Johnson tripped him up at the Dodge City 2. 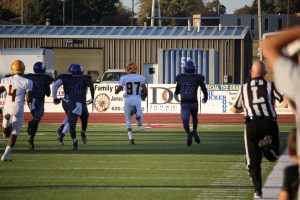 "That was such a great fake by Peyton," Sims said. "He executed it perfectly."

On the very next play, Minter slammed his way into the end zone for a 7-0 edge.

"I don't know if people realize how hard it is to do what Tra Minter does," Sims said. "We ask him to do a lot. And it's not east carrying the ball that many times."

"And he still hasn't fumbled the football," Sims said. "That's his job; protect the football."

Trailing 7-0, Dodge City's offense strolled back out onto the field. But they were promptly dismissed on a third-and-7 from their own 28 when Caden Walters' fluttering pass was intercepted by Rashaun Croney and returned 40 yards for a touchdown.

"We go into every game wanting to score on defense," linebacker Alex Figueroa said.

Mission accomplished. They also made Walters, who was starting in the same stadium where he played high school ball, look nothing like the quarterback that shattered almost every passing record imaginable at Dodge City High School. The freshman stared the game by completing 4-of-his first 5 passes. He finished by misfiring on 28 of his final 38 throws.

"I said it last week: once we get rolling, we are pretty hard to stop," Sims said. "After that first drive, we were rolling."

Garden City extended the lead early in the second quarter when Huslig, who was making his fourth consecutive start at quarterback, hit Daniel Davis on a skinny post in the end zone from eight yards out for a 21-0 advantage with 10:31 to play in the first half.

"I like to light a fire under these guys," Sims said. "Sometimes they will get mad at me, but it fuels them on the field." 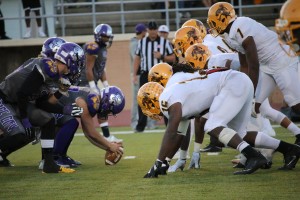 That fuel was evident, especially on defense as the Broncbusters held Dodge City to just two first downs in the second quarter.

"We work very hard every day," Figueroa said. "That's allowed us to progress throughout the season."

The sophomore, who transferred from Miami last season before missing almost all of 2015 with a broken foot, recorded seven tackles.

"Coach Sims means so much to me," Figueroa said. "He gave me a second chance when I left Miami. There was no way I was letting him down or myself."

Garden City put the game away in the third quarter with a five-play, 66-yard drive that resulted in Minter's second score of the night: a 12-yard rushing touchdown plus Huslig's two-point conversion made it 29-0 with 12:50 to play in the period.

"I don't know if any of this has really sunk in yet," Sims said. "But I will say this: I showed the guys the preseason rankings in our conference earlier in the week. They had Butler and Dodge picked 1-and-2 respectively. We've outscored those two by a combined 79-7."

And that seven points was highly questionable because it should never have happened.

In the fourth quarter, Dodge City got the ball back at their own 23 when Walters pass was tipped at the line of scrimmage and picked off by Jamie Tago. But as the sophomore defensive lineman was weaving through traffic, he fumbled the ball and Douglass Butts recovered for the Conquistadors at the 10-yard line. 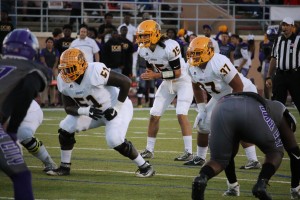 Dodge City responded by marching to the Garden City 8. On fourth-and-goal, Walters threw a slant to Austin Watkins that Croney knocked away beautifully in the end zone. But the transfer from Ellsworth was called for a questionable pass interference penalty. Three plays later, A.J. Walker burst into the end zone from two yards out ending the shutout.

"It is what it is," Sims said. "It doesn't matter in the grand scheme of things."

Tago was back in the discussion later in the fourth, when he stripped sack Walters, and Bradley Tice recovered at the Dodge City 10. On the very next play, backup quarterback Dwayne Lawson darted up the middle into the end zone, putting the finishing touches on one of the most remarkable, one-year turnarounds in junior-college history.

"This means everything to us," Figueroa said. "But we still have more work to do." 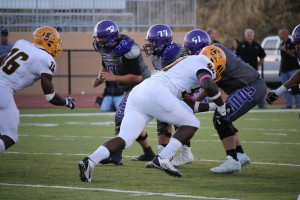 "We play note for note," Figueroa said. "That's what Coach Sims always tells us. It's game-by-game for us. We have a week off and a chance to work on school stuff. Then it's back to the grind."

Huslig finished the night 4-of-8 for 99 yards and a touchdown. He added 53 yards rushing on seven carries. Hazlett caught two balls for 88, while safety Eddie Williams registered 10 tackles, .5 sack and a quarterback hurry.

Walters was uneven all night, finishing 14-of-43 for 176 yards, two interceptions and was sacked five times. Rodney Murphy had 13 carries for 37 yards and Watkins caught six balls for 67 (three of those came on the opening drive of the game).

Notes: Sims became the first Broncbuster Coach since Bob Larsen to win a conference title…Garden City has won 11 out of their last 12 games dating back to last season…Garden City forced three more turnovers (they've forced three or more in seven out of their eight games this season and are plus-20 in the takeaway department)…The Broncbusters have outscored their six conference opponents by a combined 172-48…Minter notched his sixth 100-yard rushing game of the season…Dodge City recorded 12 sacks in last year's win at Broncbuster Stadium; they had only two on Saturday…Garden City has won six straight road games dating back to last season…It's Garden City's first nine-win campaign since 2001 when they finished 9-2 and Beat Scottsdale in the Valley of the Sun Bowl