Garden City, KS-The year 2000 brought with it a lot of change. Y2K concerns infiltrated media coverage worldwide; the Los Angeles Lakers won the first of three straight NBA titles and dial-up modems were as popular as the band U2. Remember AOL?

It was also the last time Garden City played for a national title.

But the crazy thing about history is that it can be rewritten. Such was the case on Saturday afternoon.

Redshirt freshman Tra Minter ran for a career-best 234 yards, the Broncbuster defense produced four takeaways, and Garden City clinched a spot in the national championship game with a 27-6 beat down of Fort Scott at Broncbuster Stadium.

The brown and gold improved to 10-0 on the season and 7-0 in conference play, while assuring their No. 1 ranking will stay intact heading into their December Bowl game.

"This one was special," Head Coach Jeff Sims said. "All the hard work that these guys put in. It's amazing what you can accomplish with this type of commitment."

The Broncbusters resurrection from 3-8 to national contender was curated by a coach that believed in the process when no one else did. It was authored by a man who deflects most of the credit. But when the dust settled on Saturday; when the stadium was quiet for the first time in four hours, Sims finally allowed himself to take in the moment.

"I don't know if people realize how hard it is to go undefeated," Sims said. "So many different things have to go your way. We still have one game to go, but this is something that these players will never forget."

Those same players also made sure, that the Broncbusters No. 1 ranking was never in doubt. 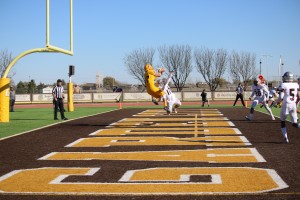 Garden City outgained Fort Scott 444-244; they held the ball for nearly 40 minutes and won the turnover battle for the ninth time this season. All of that, and it still wasn't a perfect performance.

"Was it our best game? No," Sims said. "But our effort was always there. We made some mistakes, but we won the game."

And they did so decisively.

After the Broncbusters took an 8-0 lead on Taylor Thomas's 18-yard rushing touchdown (Delshawn Phillips ran in the two-point conversion), Fort Scott muscled their way back into it. Canadian-born quarterback Nathan Rourke's 28-yard scamper kept the Greyhounds drive alive late in the first. Four plays later, running back Harry Trotter raced into the end zone from 11 yards out. Fort Scott failed on the two-point conversion and trailed 8-6 with 3:34 to go in the opening frame.

But no matter how you look at it, one play defined this game.

In the final minute of the first quarter, Garden City marched from their own 30 to the Fort Scott 15-yard line. On first-and-10, backup quarterback Dwayne Lawson coughed up the football. Greyhounds linebacker Logan Edwards scooped it up and sprinted down the left sideline. But Alex Figueroa, who might be the most-physically gifted athlete in the nation, chased down the speedy Edwards with one, all-out lunge at the defenseman's feet.

"It was a heck of a play," Sims said. "I know it sounds cliché, but you never quit on a play. Alex didn't."

The 69-yard fumble return by Edwards should have been a touchdown. Instead, Figueroa's effort eventually led to a fourth-down stop when Rourke's pass sailed over Johnnie Hankins head in the right flat, giving the ball back to the Broncbusters at the 9-yard line. 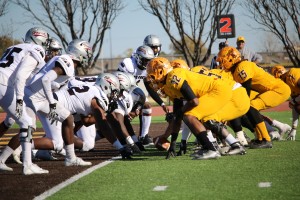 "I said it all week that all it takes is one bad play to flip the game," Sims said. "We had that happen a couple of times, but we fought our way through it."

They did so with the help of Minter, whose ascension from scout team to the first team may make for a Hollywood screenplay in 20 years.

The kid who grew up watching videos of Gale Sayers, created his own highlight reel on Saturday with two, 50-yard runs in the first half. The second of those: a 52-yard dash, put the Broncbusters at the Fort Scott (4-7, 1-6) 17. Two plays later, Mike Hughes took a reverse pitch and weaved his way up the left sideline for a touchdown and a 14-6 advantage with 10:19 to go in the first half.

"We've got good football players on this team," Sims said. "We have guys that can make plays on both sides of the ball."

Garden City padded the lead on their next possession, driving 59 yards in eight plays while converting two fourth downs along the way. The first happened when Petyon Huslig hit Daniel Davis for 27 yards on a fourth-and-2 at the Fort Scott 38. Four plays later it was fourth-and-9 at the Greyhounds 10, and once again, Huslig delivered. The freshman quarterback zipped a perfect pass to Harley Hazlett in the back of the end zone for a score, putting the Broncbusters up 21-6 with 6:21 remaining in the half.

"The time that Peyton had to throw; the running lanes that were opened; were all a credit to our offensive line," Sims said. "Luke Meadows is one of the best coaches in this league. And I don't say that to slight anyone. I say it because it's the truth."

The Broncbusters put the hammer down late in the second quarter when Fred Daughtry muffed a punt inside his own 10 that Figueroa recovered at the 3. Moments later, Minter slammed in from a yard out, putting the finishing touches on a first half that saw Garden City build a 21-point lead while outgaining the Greyhounds 338-125. Minter accounted for 195 of that on the ground.

"I look at the first half and I thought that Tra didn't play very well," Sims said with a big smile. "Then I look at the numbers and I'm like wow. That's pretty good."

And per the norm; the defense took it from there.

Hughes dazzling interception of a wobbly Rourke pass early in the third period, ended Fort Scott's lone scoring threat in the second half. Then it was Jeremy Faulk and Bradley Tice sandwiching Rourke to thwart another Greyhound march before Jamie Tago recovered a fumble late in the fourth to cement Garden City's first perfect regular season in 16 years. 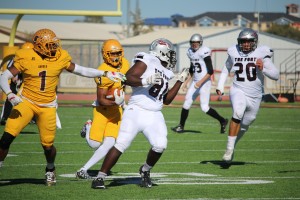 "When you look back on things, you don't want to have any regrets," Sims said. "That's how these guys play. Note for note we always say in practice. A team like this comes along every so often. That's how special this is."

That defense, which came into the game fourth in the nation yards per game allowed, limited the Jayhawk's leading passer to just 155 yards on 12-of-34 throwing.

Meantime Huslig, who saw his streak of 104 straight passes without throwing an interception end in the third quarter, was 12-of-24 for 141 yards and a touchdown. Thomas added 59 yards on the ground and a score while Davis had three catches for 57. Phillips led the way with 13 tackles and a quarterback hurry. 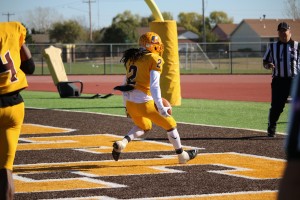 Notes: In five home games this year, the Broncbusters have allowed just 20 points…Trotter's first quarter touchdown was the first allowed by Garden City's defense since the Independence game back on Sep. 10 (ended a streak of 11 straight quarters)…The Broncbusters ran 16 more plays than Fort Scott (86-70)…It was the fifth time this season Garden City surpassed 400 total yards…Garden City held the ball for nearly 21 minutes in the first half…The 39:22 time of possession was the second most this season (they held the ball for 39:46 vs. Coffeyville)…The win coupled with Hutchinson's loss opens up the Salt City Bowl as a possible destination for the national championship game (any bowl game that the Broncbusters play in; they would have to be invited; if any one of them offers an invite to the No. 1 and No. 2 teams, that game would be designated as the National Championship Game)…Tuesday, Nov. 15 is the day that all bowl game participants will be selected…Garden City became just the fourth Jayhawk-Conference team in the last 15 years to finish unbeaten joining Sims' Fort Scott team in 2009 and two Butler squads…The Broncbusters played without defensive back Bryan Blunt, who was suspended for one game because of a targeting penalty he was flagged for vs. Iowa Central (he will play in the bowl game)

Next up: National Championship game-Saturday, Dec. 3-time and location to be determined on 99.9 FM; westernkansasnews.com/kwkr and mobile app: KWKR