Nearly 16 years ago to the day, Garden City quarterback Corey Jenkins, with the Broncbusters trailing Glendale 13-7 with less than two minutes to play in the fourth quarter of the national championship game, was driving his team down the field for the game-winning touchdown. Once the Broncbusters reached the Gauchos 25, disaster struck. Glendale linebacker Tim Patrick intercepted Jenkins deflected pass, dashing the brown and gold's title hopes.

"It's one of those moments you never want to remember," said Garden City High School athletic director Drew Thon, who was a starting linebacker on that 2000 squad.

Huslig capped off a wild final minute with a one-yard touchdown pass to Harley Hazlett with 30 seconds remaining; Bryan Blunt intercepted a desperation heave by Emmanuel Gant in the final seconds, and Garden City captured the program's first national title with a 25-22, heart-stopping victory Saturday afternoon in the El Toro Bowl at Memorial Stadium.

Huslig's late-game heroics overshadowed another dazzling performance by Garden City's defense. But their lack of depth on that side of the ball nearly cost them in a fourth quarter for the ages.

Leading 19-14 with 12 minutes to go, Arizona Western (11-1, 8-0) began slicing their way through Garden City's defensive front; a wall that seemed impenetrable for most of the afternoon. Tre Rodriguez's 44-yard dash gave the Matadors a first down at the Broncbusters 33. It was the longest run allowed all season by Josh Hager's defense. 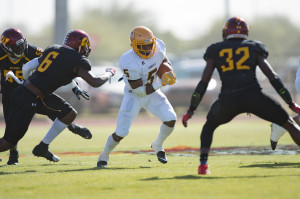 "We were gassed," Sims said. "And they were gashing us."

Greg Bell continued the assault on the very next play, sprinting 14 yards to the Garden City 19. Moments later, Gant connected with tight end Jeremy Patton, who fought off two defenders to reach the end zone from eight yards out, giving the Matadors a 20-19 advantage.

"You just have to keep playing each play," Sims added. "We never put our heads down."

Gant pushed the lead to three when he hit David Lucero in the middle of the end zone for the two-point conversion, putting Arizona Western up 22-19 with 10:07 to play in the game.

"I still felt like we had a chance," Huslig said. "We just needed to keep going."

The Broncbusters chances for hoisting the trophy began to slip away late in the fourth.

With 6:22 left, the Matadors began a time-consuming march that ate up more than five minutes of the fourth-quarter clock. Arizona Western converted two third downs on the drive; none bigger than a third-and-11 at their own 38. Gant dropped back and rolled right. Just as he released the ball, Broncbusters linebacker Alex Figueroa drilled the sophomore quarterback. But the line-drive pass was a thing of beauty, hitting star receiver Steffon McKnight right in the chest for a 22-yard gain to the Garden City 40.

"You have to hand it to him (Gant); that was a heck of a throw," Sims said. "We got there, and he still put that on the money."

Then, facing a third-and-3 at the Garden City 33, it was Rodriguez finding first-down yardage to the Broncbuster 20.

"We couldn't stop them at that point," Sims said.

Things seemed even direr when Rodriguez found a crease up the middle on the next play for 17 yards. Only Mike Hughes outstretched arms kept the Florida-Atlantic transfer from waltzing into the end zone. 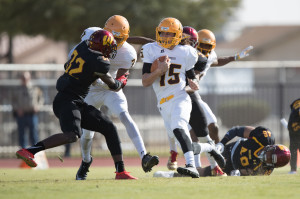 "Our guys never gave up on plays," Sims said. "That's why I always tell them to just play the play. Each play will take care of itself."

Rodriguez carried the ball three straight times inside the 3-yard line and gained a total of one yard. Now it was fourth-and-goal from the 2 with 1:30 to play and decision time for Arizona Western Head Coach Tom Minnick: keep the offense on the field and go for the kill, or play it safe and kick the field goal.

"I totally agree with Coach Minnick's decision," Sims said. "We would have done the same thing."

Minnick rolled the dice and went for it. It was an odd call; especially against one of the nation's top defenses: a play-action, naked bootleg that never fooled Blunt and Rayshawn Wilborn, who combined to rip down Gant behind the line of scrimmage for a 13-yard loss.

Ironically that same play worked for a touchdown earlier in the season vs. Mesa. Against Garden City, the Broncbusters were licking their chops.

"We gave ourselves a chance at the end," Huslig said.

That was the tiny little sliver that the true freshman needed to spark the fire. And it setup one of the most dramatic finishes in NJCAA history.

With no timeouts; 1:20 showing on the clock and 85 yards from the go-ahead score, the brown and gold needed a miracle. And after back-to-back incompletions put Garden City into a third-and-long situation, it wasn't looking promising.

"We just needed to get a first down," Huslig explained. "I just stayed within myself."

The freshman calmly gathered himself and delivered a strike to Daniel Davis for 12 yards. Then it was Huslig to Davis again for eight. 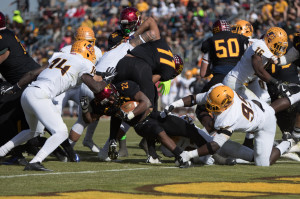 "I just took what the defense gave me," Huslig added. "I didn't want to force anything."

On the very next play, Huslig lobbed a majestic rainbow down the right sideline that Ben Phillips snagged out of the air. The sophomore receiver sprinted 51 yards to the Arizona Western 14 before Jekyren Miles shoved him out of bounds.

For Miles, his nightmare was just beginning.

Back-to-back pass interference penalties in the end zone-one on Miles; the other on Keisean Nixon, put the ball at the 1-yard line with 37 seconds. Then the play that will live in Garden City Community College lore.

On first-and-goal, Huslig launched a fade into the back-left corner of the end zone that Hazlett plucked out of the heavens; snaring it away from Miles, and giving Garden City the lead back 25-22 with 30 seconds remaining.

"It was a three-person progression," Huslig said of the play. "I didn't have a lot of time because they were sending a lot of people. But Harley has been telling me all year to trust him. So I did, and it worked out."

The celebration was nearly doused when Huslig fumbled the ball on the two-point conversion. But the Matadors failed to recover, keeping it a three-point game.

"I made a mistake on that call," Sims said.

"In a way, I feel bad for Arizona Western," Sims said. "I know what that feeling is like. They're a great football team. They played well enough to win this game." 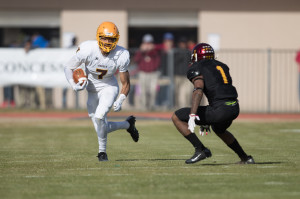 The Matadors misfortunes were compounded by a sluggish start, gaining only 20 yards in the first quarter as Garden City (11-0, 7-0) built a 13-0 lead on Huslig's spectacular 85-yard touchdown run on the Broncbusters third offensive possession and Malcom Howard's fumble recovery in the end zone in the second quarter.

Howard's fumble recovery in the end zone in the second quarter came following a decision by Minnick that will be second guessed for all eternity. Going into the wind, Arizona Western was staring at a fourth-and-1 from their own 10. Minnick dropped Gant back into the end zone to punt. But the second-year starter took the snap and acted as if he was going to throw the ball. Howard wrapped both arms around him; knocking the ball free before recovering it for a touchdown.

"If I told him (Howard) three years ago that he would make two plays like that to win us a national championship, he would have looked at me like I was crazy," Sims said. "But he did it, and I'm so proud of him."

Howard's other contribution came on the third play of the final stanza when he blocked Gant's punt, giving Garden City the ball at the Arizona Western 22.

"I remember the Iowa Western game when Malcom got us going," Sims said. "Same thing today."

But the Matadors had no plans of going quietly. Instead they used a questionable roughing the kicker penalty in the second quarter to extend a drive. Then on second-and-10 from the Broncbuster 14, Gant hit Dominick Anderson on a slant for a touchdown that pulled Arizona Western to within six. 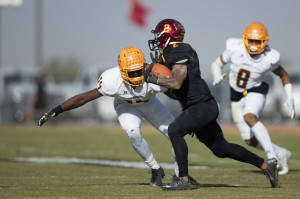 The game appeared to be getting away from Garden City the next time they had the ball when Miles returned Huslig's fumble 10 yards for a touchdown and 14-13 Matador advantage.

"We just had to settle down," Huslig said. "That's what the coaches kept telling me."

On the ensuing kickoff, Mike Hughes nearly turned it back over to Arizona Western when he flat out dropped Brady Viles end-over-end boot. But the Broncbusters recovered, dodging a major bullet.

"That second quarter could have gotten away from us," Sims said. "But we never allowed that to happen."

Garden City settled down, and Huslig hit Hughes for a 32-yard touchdown pass in the final minute of the first half to give the Broncbusters a 19-14 lead. It was only second time all year that the Matadors trailed at the half.

Huslig was named the most valuable offensive player, completing 13-of-22 passes for 192 yards and two touchdowns while running for 112 and a score. Tra Minter, the nation's second leading rusher was held to just 24 yards on 19 carries. Davis had five catches for 36 yards; Campbell added three for 38 and Hazlett had two for 22 and a touchdown. Jeremy Faulk was named defensive MVP with four tackles and a quarterback sack. 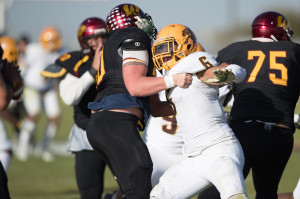 Gant finished 16-of-30 for 219 yards, two touchdowns and two interceptions for Arizona Western, who lost their second national title game in the last five years. It was his first multi-interception game since week one vs. Iowa Western. Rodriguez became the first opposing back to hit 100-yards rushing against Garden City's defense in 13 games-tallying 134 on 26 carries. McKnight had a team-best five catches for 63 yards and Michigan-State transfer Craig Evans, who was very close to landing in Garden City before the season started, totaled six tackles and a forced fumble.

Notes: Garden City improved to 11-9-1 in bowl games all-time…The Broncbusters completed their first ever perfect season…The Broncbusters are now 4-1 vs. ranked opponents under Sims…Huslig finished his freshman season with 12 touchdown passes to only one interception…Garden City snapped Arizona Western's 13-game winning streak…Garden City took a lead into the half for the ninth time this season…Garden City became the first Jayhawk Conference school to win a title since Butler won it all in 2008